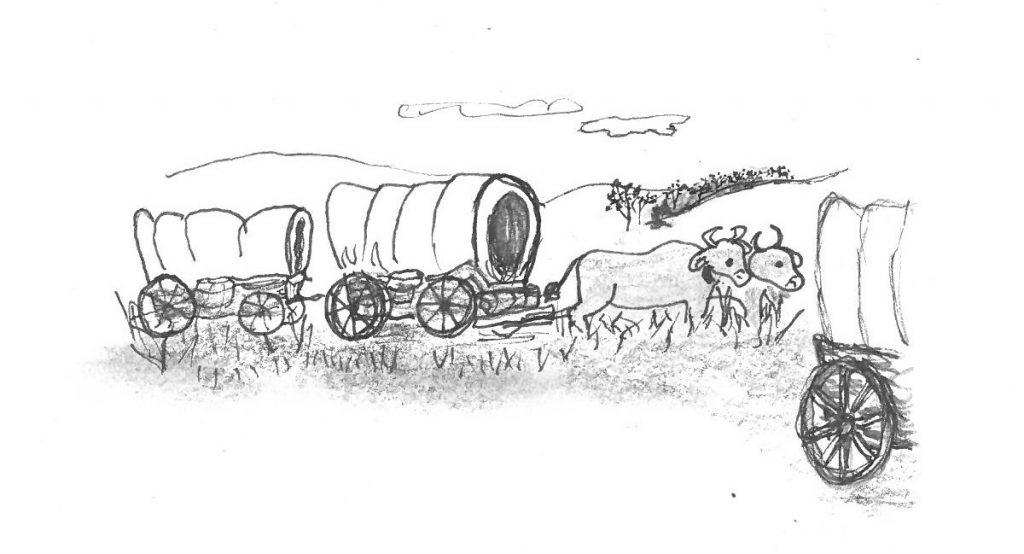 What Do You Know About the Santa Fe Trail?

This is the 200th Anniversary of The Santa Fe Trail. The Black Alabaster Box, Book 1 of The Last Crystal Trilogy begins as Grace Willis and her family are about to leave for California on the Santa Fe Trail. Dr. Willis and his wife want to start a medical school. The Willis family leaves in about 1856, after the gold rush and before railroads replaced wagon travel West.

People had many reasons for going West. Dr. and Mrs. Willis’ dream of strting a medical school was not an unresonable one. 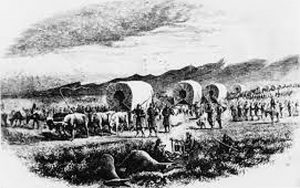 I’ve tried very hard to make the The Black Alabaster Box as close to history as I can–except for the magic. But that comes later.  I thought you might like to know a little bit more about the Santa Fe Trail. Here are a few notes I’ve made about the Trail and some links you can follow if you get really interested in learning more about The Santa Fe Trail.

The Santa Fe Trail was one of the routes traveled by pioneers and traders in the 19th century. You can read more about its history by clicking the link or you can look at interesting bits about wagon trains. The wagon trains link has a cartoon at the top of the page that gives three key facts that are worth knowing and might surprise you.

European explorers and pioneers thought they were opening up the West when they began to travel across the vast land that now makes up the Midwest United States. It was already open, though.

First Nation people had already established their own system of trading at least four hundred years before the Spanish came to the Southwest in the late 1500s. The plains tribes traded buffalo meat for agricultural products such as beans and squash that were grown by Pueblo people who lived in the Rio Grande valley.

The Spanish Empire and the Santa Fe Trail

The Spanish set up an empire in the New World, as did Britain and France. Spain wasn’t so successful in claiming Florida and the southern states, but it did expand from Mexico up through what is now Texas, New Mexico, Utah, Nevada, Arizona, western Colorado and California. It was all known as Mexico at one time. You can see a time-line of Mexico  and watch a video by clicking the link. Warning: the video has some bloody images, so don’t watch it if you’re likely to have nightmares. Or have your parents preview the website so you can skip over the scary bits.

Many Spanish people who came to Mexico settled in the Rio Grande valley area. But trade became a problem. The Spanish government thought that any trade taking place had to benefit Spain. Trading with First Nation people was illegal.

Once Mexico became free from Spain, trading between the US and Mexico flourished. The Santa Fe Trail connected Santa Fe, the capital of New Mexico Province (still a part of Mexico) with the new state of Missouri. Most of the traffic along the Santa Fe Trail was for trade.

Below is aNational Park Service map of the Santa Fe Trail. Follow the link to learn even more about the history of the trail. 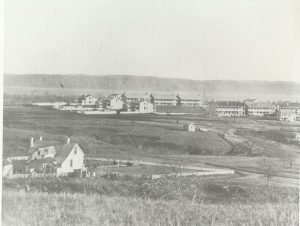 The US Army had forts in Western areas to protect trade routes, to keep settlers from illegally claiming tribal lands, to protect travelers from bandits, and to keep tribes from warring with each other. A famous fort that is still active today is Ft. Riley. It is home to the U.S. Army First Infantry Division. The picture is from 1866 and the earliest known picture of the completed fort. About the time the picture was made, the 7th U.S. Cavalry was organized at Ft. Riley under the command of Lieutenant Colonel George Armstrong Custer.

Many of the forts along the Trail were more like outposts that what you might think of as a fort. There were a few buildings rather than the massive stockades made famous in the movies. Supplies were usually sent up the Missouri River to Fort Leavenworth, about thirty-five miles north of Kansas City. There supplies were loaded onto wagons for the trip west. Native American attacks on wagon trains weren’t nearly as frequent as you might think if you depend on old movies for information. It wasn’t until traffic along the Trail and illegal settling of land made First Nations people concerned about protecting their lands that military posts served to protect pioneers from attack.

There were other traders, who weren’t working for the army. They took products such as cloth, needles and thread, knives, and axes to trade for silver coins, gold, wool and mules. Traders usually sold their wagons and oxen in Santa Fe and used the mules to pack their goods back to Missouri.

Traders and Pioneers along the Santa Fe Trail

By the time Grace Willis’ family set out on the Santa Fe Trail in the late 1850s, the U.S. had taken the land from Mexico. The Black Alabaster Box begins in 1856. The U.S.  paid Mexico $15 million for the land they took. But it was a deal that left Mexico half the size it was before.

People such as Dr. and Mrs. Willis, who wanted to settle in California followed the Santa Fe Trail with small companies of pioneers all the way to Santa Fe and beyond. After that, they followed the Gila Trail or one of the southern routes to California.

Some wagon trains were highly organized with a Wagon Master hired by the company and a charter that was agreed upon by all members of the company. By 1856, some pioneers struck out on their own and found a group of people going their way. The trails West were crowded as wagon trains filled with trade goods came from Santa Fe and others were on the way to Santa Fe. 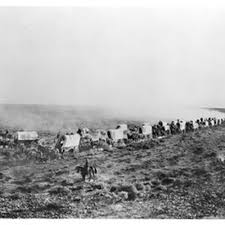 When gold was discovered in California in 1849, more people followed the Santa Fe Trail. But by the late 1800s, it began to be replaced by the railroads. Families looking to settle in the West were always fewer in number along the Santa Fe Trail than the more popular Oregon, Mormon, and California Trails. Perhaps this was due to the fact that after leaving Santa Fe, wagon trains had to face the broad, southwestern desert.

The Santa Fe Trail crosses five states: Missouri, Kansas, Colorado, Oklahoma, and New Mexico. You can make a virtual trip along the trail as it looks today at the National Parks website.

Another website, gives information about the Oregon/California trail. It includes a section on “Trail Basics” with interesting information such as “The Wagon.” You can click on the link and read about wagons the pioneers used and see a diagramof parts of the wagon. Another section you can click is “A Day on the Trail.” It gives a typical schedule, starting with the 4:00 AM wake call by a bugler or somebody firing a rifle into the air.

In many places you can still see the ruts left by wagons more than a hundred years ago. Once I visited the Trail in the Oklahoma Panhandle near Boise City and in Eastern Kansas near the city of Lawrence. 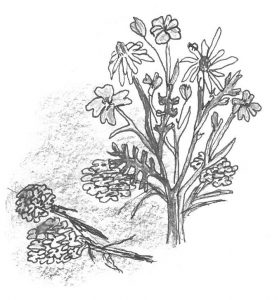 Another time, when I was in Kansas, I picked some flowers growing along the Santa Fe Trail ruts. The prairie around them had never been plowed. I thought about what it would have  been like to pick the same kind of flowers as a pioneer. Maybe that’s why I have Grace picking flowers along the Trail in the book. The flowers to the left appear in at the beginning of Chapter Five in The Black Alabaster Box. Many of these flowers still grow along the trail today.