The Making of an Egyptologist? 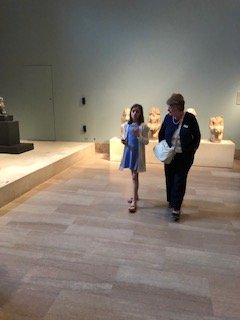 My granddaughter wants to be an Egyptologist. At fourteen, she has been teaching herself to read hieroglyphics, using the classic, Hieroglyphics for Beginners, by E. A. Wallis Budge.

This all began in third grade when a teacher introduced her to myths from various cultures. She was intrigued by Egyptian mythology.

Intrigue turned to the desire to know more, when her mother picked up on the interest a couple of years later and we began reading Elizabeth Peters’ Crocodile on the Sandbank as a family story. She was hooked on the series and on what Egyptologist, Barbara Mertz who wrote under the pseudonym, Elizabeth Peters, was teaching her about ancient Egypt.

I gave her a stamp set with Egyptian hieroglyphics from The Metropolitan Museum in New York, but it was soon clear that it was not enough. That’s when her mother introduced her to Wallis Budge, the famous Egyptologist who worked for the British Museum in the Golden Age of Egyptology during which Elizabeth Peters’ heroine, Amelia Peabody, plumbed the treasures of ancient Egypt and solved mysteries on the side. Now the book is well worn and indexed with post-its from beginning to end.

On a visit to the Egyptian collection at The Metropolitan Museum in New York, she was able to explain a great deal to us about what various artifacts said and take us deeper into the exhibits we were seeing. Her mother made her close her eyes before we entered The Temple of Dendur. I wish you could have seen her face when she saw it for the first time. It was a joy to watch her guide a good friend from the UK through the exhibit a year later (see the picture above).

Her growing interest in archeology was heightened by watching back episodes of The Time Team. For the uninitiated, The Time Team was a British television production that lasted from 1994 until 2017. Every episode covered an archeological dig, limited to three days. Excavations were led by first-rate archeologists, usually in England, and covered the range of human history. The actor, Tony Robinson, explained things in terms we could all understand, interviewing the professionals about the decisions they were making.

So now, my granddaughter wants to be an archeologist, focusing on ancient Egypt. As a former teacher and teacher-educator, I find satisfaction in knowing than an elementary school teacher ignited the spark. As a writer, I’m delighted at how a mystery series sharpened her interest and supplied her with a great deal of accurate information along with the good fun and imaginative adventure.

Will she follow through and become an Egyptologist? All I can say is, “Go girl! Follow the dream.” If the dream changes on the way, she will have had the joy of learning new things that will enrich whatever comes next. If she ends up excavating tombs in Egypt, I’m in for an Egyptian holiday!