I made the decision to illustrate my trilogy for very selfish reasons. As a child, I hated it when there were pictures of the people in fiction. The illustrator almost always messed with my ideas of what characters should look like. My mother was an artist, though she would add a disclaimer, were she here to do so. (It is she who taught me to appreciate the way the light falls on leaves, the subtle colors in cloud formations, or the importance of a single red lady-bug in the garden.) I took some art classes in college and, as a gift from me to me, I took drawing at Teachers College, Columbia University while I was on the faculty in Curriculum and Teaching. So I figured it would be fun to do the icons for each chapter opening.

It has been. But there have been moments of frustration besides getting Big Red into a truck (see the June 24 post). The bats nearly drove me batty.

I should explain. In The Black Alabaster Box, Grace Willis visits The Alabaster Caverns, but we don’t hear about bats. In Book 2, The Red Abalone Shell, Ruby and Junior do encounter bats. Every spring, Mexican free-tailed bats migrate from Mexico to the Alabaster Caverns, near Freedom, Oklahoma to rear their young. The Mexican free-tail is one of several species of bats to inhabit the caves. They’ve probably been visiting the Caverns long before Ruby and Junior Swathmore got there. Ruby’s attitude toward bats isn’t too different from that of many people today.  We think, “Yikes!” or “Vampire bat!”or “Flying rodent!”or “They’ll get in my hair and it will fall out!”

When I did the research to illustrate the Chapter 6, in which bats appear, I learned a lot about bats.

I tended to see them as valuable insect gobblers. And they are. For example, every evening the bats fly out of The Alabaster Caverns to feed, each bat consuming anywhere from 600 to 1,000 insects in an hour. But I had no idea that they also pollinate some plants and distribute seeds. According to Bat Conservation International, the “African Tree of Life,”or the great baobab tree of East Africa depends on bats for pollination. (I fell in love with the baobab tree when we were in Zambia one summer when my daughter was a child. I can’t imagine an Africa without baobab trees–an unfortunate possibility as baobab trees are at risk–but another story.) Bananas, mangoes, peaches and guavas are pollinated by bats, too. Who knew? Not me. And I hadn’t ever thought about the fact that bats are the only flying mammal left. (Flying squirrels and lemurs actually glide, they don’t flap their wings as do bats.)

Sometimes bats get rabies. That’s pretty scary, but only a very small percentage. Children and their adults need to exercise caution if they find a dead bat just as they would when finding any dead animal. There are other diseases associated with bats that are identified by the Center for Diseases Control, with appropriate cautions.  Bats, in turn, probably have more to fear from us. They are endangered by loss of habitat, pesticides, misinformation, and diseases (the most deadly of these is apparently white nosed syndrome a wildlife disease that affects hibernating bats).

But back to the point: Illustrating.  My first attempt to depict the ribbons of bats that fly 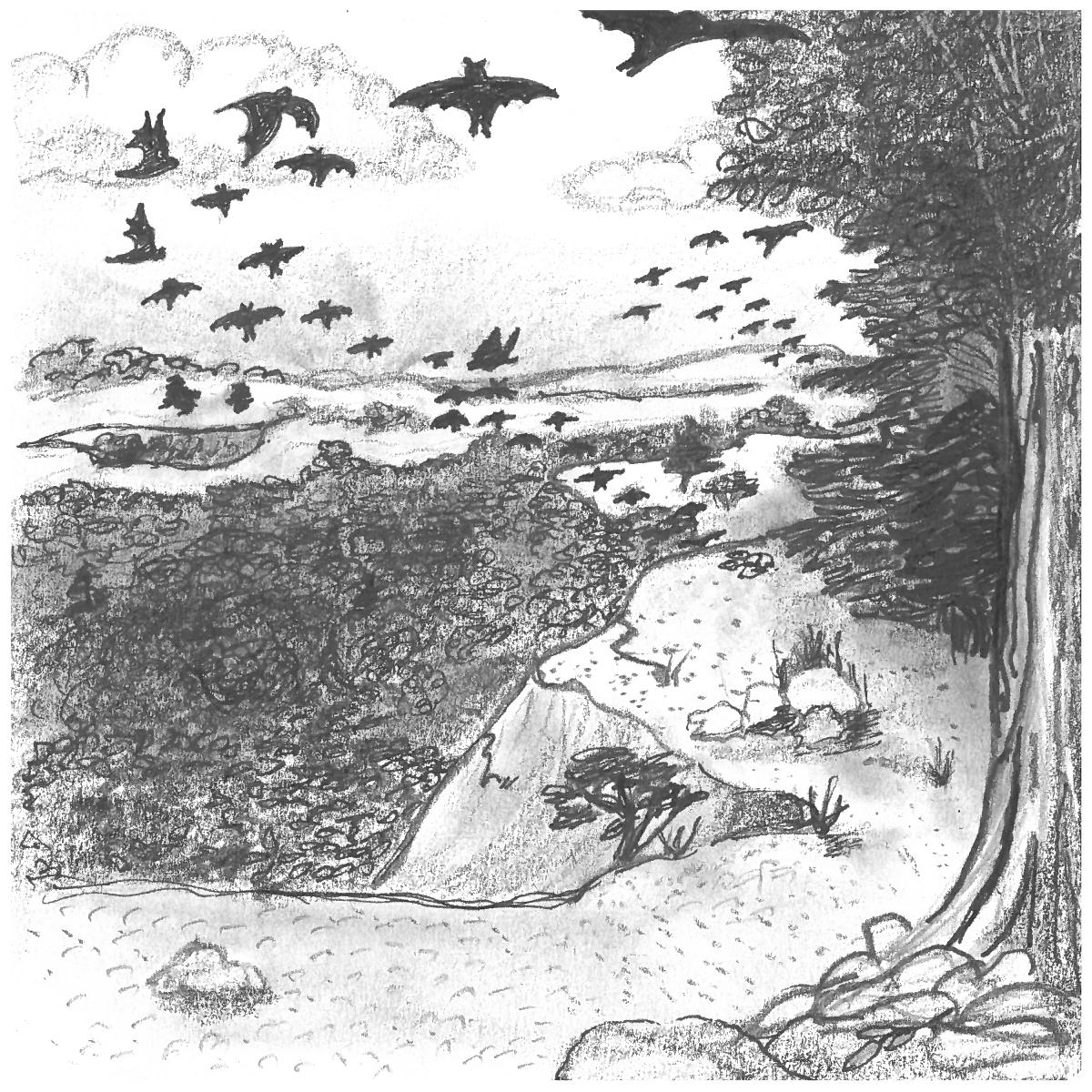 out from the Caverns every summer evening seemed heavy. I wasn’t satisfied.

Then I tried showing the bats more closely. But the chapter isn’t about bats and this attempt didn’t seem to be working either. I liked that little guy at the front, but I didn’t finish the sketch because I thought he was making a promise the chapter didn’t fulfill.

Finally, I cameup with the last sketch that was a bit more satisfying.  What I like about it is the suggestion of bats–a ribbon of bats just beginning their exit from the caverns before sunset. 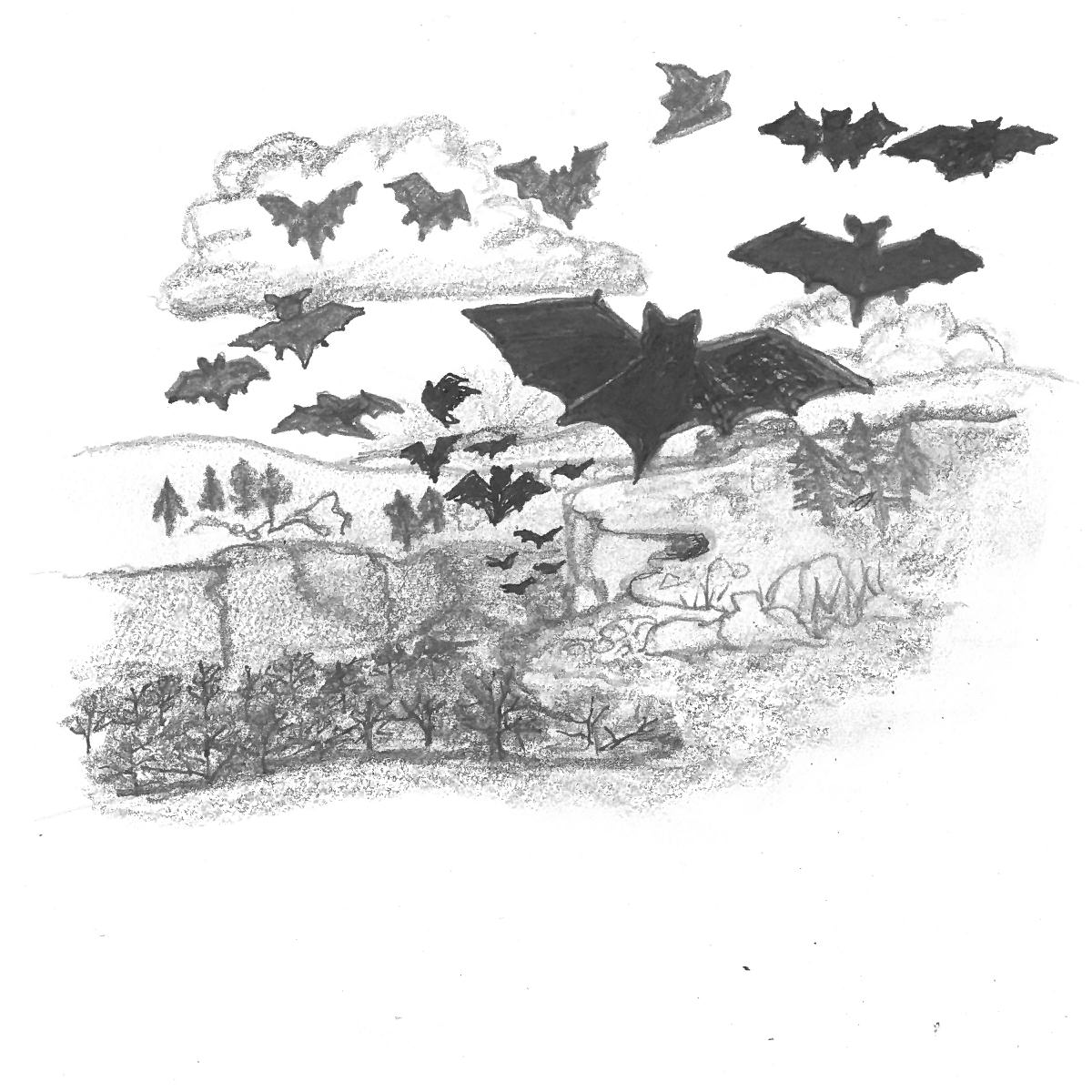 If you want to know more about bats, there are some great resources. Most of them can be read by children, certainly with children. And the Bat Conservation International website has directions for building a bat house.  Here are a few resources:

Watching Bats The Oklahoma Department of Wildlife Conservation’s Wildlife Diversity Program offers the public the chance to watch bats on site near The Alabaster Caverns State Park every summer.  https://wildlifedepartment.com/wildlife/wildlife-diversity/selman-bat-watch

For a bit about the history of bats at The Alabaster Caverns, see: http://www.okhistory.org/publications/enc/entry.php?entry=AL002

All Kinds of Cool Stuff About Bats can be found at Bat Conservation International’s website, http://www.batcon.org

More About Bats can be found at The World Wildlife Organization, including more information about building a bat house. https://www.nwf.org/sitecore/content/Home/Garden-for-Wildlife/Cover/Build-a-Bat-House

Detailed Information About White Nose Syndrome and what you can do to help may be found at the White-Nose Syndrome website link above.