A girl who doesn't believe in magic, a dog from times past, and a hidden crystal.

It had been quiet along the Santa Fe Trail for more than a year when the Stokes Company set out for California, the Willis family among them. A reluctant traveler, young Grace Willis longs for her fortunate, safe, and comfortable life at home.

Just as she is learning to negotiate life in a wagon-train, Grace is kidnapped by fellow travellers and taken into Oklahoma Territory. She must decide if she will cave in to despair or muster the courage to run away and search for her parents. Grace finds help in unlikely places. She discovers that there really is such a thing as magic, and there are some things only a child can do.

Get it in paperback or hardcover:

Grace Willis stood at the front door looking out, wondering what it would be like tomorrow when she no longer had a home. Will the robins nest in the lilac bushes this spring without me to watch over them? Who will collect seed pods when the Catalpa trees drop them along the driveway? Will the garden know I am gone? She was utterly miserable.

Left up to her, nothing would change. But Grace didn’t get to choose. With new land opening in the West, her father and mother were determined to go to California. It was their dream to start a medical school. So tomorrow is the auction. And there is nothing I can do about it. Grace heaved a great sigh.

Just then, a big black and white dog came bounding up the front porch steps. Wagging all over, the dog looked at her as if they were best friends and he was asking permission to come over and play.

“Why, he does look just like Old Shep,” said Daddy.

“It can’t be,” said Mamma, joining them at the door. “Old Shep would be at least one hundred three in dog years by now. Dogs don’t live that long.”

Looking at Daddy, the dog held up his right paw. Daddy stepped out on the porch. Shaking the paw respectfully, he asked, “Do you mind if I have a look, old fellow? You all can come out, he’s a gentle dog.”

The dog sat quietly. Daddy knelt beside him, carefully feeling the paw and all the way up the leg. “Apparently this dog does live that long,” he said. “This is Old Shep. His leg healed nicely, if I do say so.”

“Really, you can’t be Old Shep,” Mamma said kindly as she sat down in a rocking chair. The dog went to her, putting his head in her lap. “Why, you are Old Shep!” Mamma exclaimed. “Remember how he used to do that? I’ll swear, you don’t look a day older.”

“Perhaps we misjudged his age,” said Daddy. Sitting down on the porch swing, he motioned for Grace to sit beside him.

“Either that or he’s magic!” Mamma scratched Old Shep behind the ears.

“I’m not entirely prepared to rule out magic,” said Daddy, giving Mamma a knowing look. “There are plenty of things in this world that can’t be explained.”

Dogs aren’t magic, thought Grace. But, if he was magic, I’d tell him to stop the auction from happening.

“Old Shep had a broken leg when a friend left him with us, Grace,” Daddy explained. “You probably don’t remember Mr. C’lestin. You were a little tot then. Old Shep was limping and in a lot of pain. I set his leg. He stayed with us almost a year. Then he just disappeared. That was nearly ten years ago.”

“I daresay he had his reasons,” said Daddy. “C’lestin is an unusual person, a bit myste- rious—but very nice.”

“Old Shep must not have been his dog,” concluded Grace. “But why didn’t Old Shep want to be our dog? We loved him.”

“I’m not so sure you can say that Old Shep belongs to anyone,” said Daddy carefully,

searching for the right word. “It is more like we became part of his circle of friends. Now he’s come back to see us.”

“I smell dinner,” exclaimed Mamma. “It’s our last dinner in this house. I’d sure hate for it to burn. Come set the table, Grace.”

Last dinner. Reluctantly, Grace washed her hands at the kitchen pump and set the table.

She could have stayed with Grandpa and Grandma Willis the next day while the auction went on, but she refused to go. In one last effort to bring things to a halt, she dug her heels in and had an all out, screaming tantrum. But it didn’t do any good.

“I know this is hard, Grace,” said Mama, sighing. “You are going to have to decide if you are a part of this and ready to accept an adven- ture, or if you’re going to cling to your misery and lock out the world. Either way, we are going to California and so are you.”

Old Shep stayed by her side the whole ter- rible day. He was the only one who acted like he understood how she felt. When she crawled under the porch, he went with her. When she retreated to the carriage house in the back yard, he came along. When she hid in her secret place in the bushes behind the Catalpa trees, he was there.

They watched from her hiding places as strangers hauled off one precious thing after another. By the end of the day the house was completely empty. It was no longer their house. Somebody bought it, too.

After the auction, they stayed with Grandpa and Grandma Willis. All too soon family and friends came to help them load their wagon.

“That’s a real ne thing you and the Mrs. are doing, Doc,” said one of their neighbors as they stacked supplies on the wagon. “I wouldn’t have the courage to go West.”

“You sure do have a lot of books and medical supplies piled up in there,” said one of the men as they nished loading. “You might ought to take more food. It’s a long ways out there from what I hear. You can’t eat books!”

Daddy good-naturedly shook the man’s hand. “You’re right, Paul. Don’t worry. We’ll be trading for a bigger wagon once we get to Kansas City. We’ll stock up on provisions there.”

“I reckon they don’t have good doctors way out there in California,” said an uncle. “Still, we sure will miss you all.”

“Amen to that. We’ll miss having the best doctor in St. Louis right next door!” said one of the women, giving Mamma a hug. “Lord knows I’ll miss you, Amanda. And little Grace, too,” she added, wiping away tears.

Little? Grace was offended, but she didn’t say anything. Mamma would say back talk is rude.

Grandpa and Grandma Rhoads lived on a farm way out in the country. They stayed over at the Willis house to see them off the next morning. The sun was barely up when their last good-byes were said. Grandma Willis gave Grace a whole tin of gingerbread men. “These won’t last you all the way to California. When you get settled out there, I’ll just have to send you some more.” There were tears in her eyes. Grace gave her a hug. There were tears in her eyes, too.

Grandma Rhoads held her close. “I know you don’t have room for another thing, but I want you to have this, Grace. I made it for you. It won’t take up much room. When you hold it, just remember how much you are loved. Two thousand miles can’t change that.” She gave her a linen handkerchief with a wide crochet lace border. It was beautiful, but when Grace thought of all the things she wished she could take, she hadn’t thought of handkerchiefs. She thanked Grandma and hugged her just the same. She didn’t want to hurt her feelings.

“Leastwise he seems to think so,” said Grandpa Rhoads, chuckling.

“Old Shep makes his own decisions,” said Daddy. He laughed, but there were tears in his eyes as he got in the wagon where Grace and Mamma now waited. Mamma wiped her eyes.

How can they be happy and sad at the same time? Grace wondered. All she could feel was sadness. Tears made their way down her face and splashed on her hands.

Then came the moment Grace dreaded most of all. They set off for the frontier town of Kansas City. Behind her, fading into the distance was all she had ever known and just about everybody she loved. She had lived in the big house in St. Louis, Missouri her whole safe, comfortable, uneventful life.

This book is fantastic. It weaves history, fantasy, life lessons, and story all into one. I could not put it down!
Anjela Horjus
Head Librarian, Lower School Glenelg Country School

Books in This Series 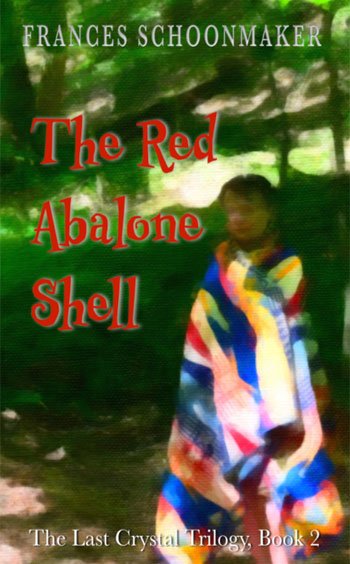 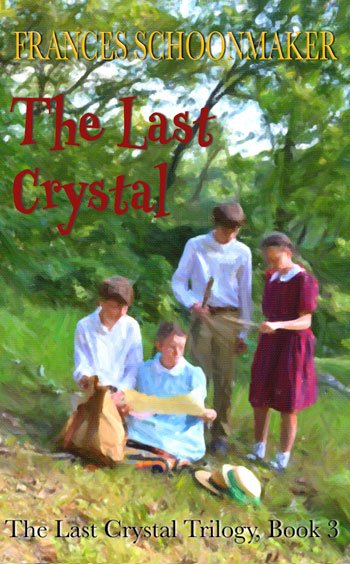 You Belong Here, by Baltimore Artist Kacey Stafford Tucked into the basket that I prepared for the Malice Domestic live auction was a Kacey Stafford

Tea and Biscuits and the Silent Auction at Malice Domestic

The Alabaster Caverns near Freedom, OK are one of two places in the world where you can find black alabaster. Not far from the Santa Fe Trail, it is important in The Black Alabaster Box. 3 min. read. Kid Friendly.

What Do You Know About the Santa Fe Trail?

The Santa Fe Trail recently celebrated its 200th Anniversary. Who were the people who used the trail? Author, Frances Schoonmaker, discusses a fictional family making the trip west and offers resources for discovering more about the Santa Fe Trail. 6 minute read. Kid Friendly.

2021 marked the 200th Anniversary of the Santa Fe Trail. First and foremost a trade route, it began with a man hard-pressed for cash: William Bucknell. (2 minute read)